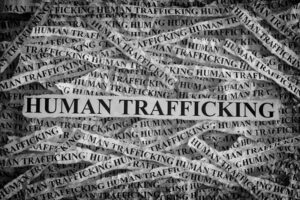 Reality:         There are more people enslaved today than there were at the time of the Transatlantic Slave Trade.

There are 25 million people enslaved worldwide with another 15 million in forced marriages.  (International Labor Organization 2017 report.)

Smuggling is a crime against the border where someone enters a country without the appropriate documentation, typically by paying someone else to smuggle them across the border.  It requires transport and movement from one country to another, and both the person coming in without permission as well as the person bringing them are committing a crime.

For example: A mother who brings people to her home to have sex with her underage child is trafficking the child even though the child never leaves the house.  Only the trafficker is committing a crime when they exploit someone else for forced labor or forced sex.

Reality:         Trafficking is occurring in cities and towns all across Texas.

There are four (4) major types of trafficking

Child Sex Trafficking – Trafficking children, under the age of 18, by any means into the commercial sex industry. (Does not require the use of force, fraud, or coercion).

Child Labor Trafficking – Trafficking children, under the age of 18, by force, fraud or coercion into industries such as agriculture, food service, manufacturing, domestic servitude, or hospitality

There is no one particular look to a trafficker. Traffickers are people who are willing to treat other people like objects or commodities that they can buy, sell, or exploit for their own benefit.

Some of the more common methods of recruitment of children

Copyright All Rights Reserved © Women Give Back - San Antonio, Texas